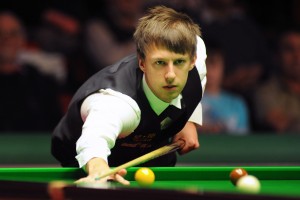 JUDD TRUMP completed a 3-1 victory over Martin Gould to win his second Championship League Snooker title and book himself a place in this year’s Champion of Champions event.

The Bristol potter looked at ease throughout the winners group, and takes away a total of £14,400 for his efforts in the internet streamed event.

Trump was a winner of this internet streamed event in 2009, and played in Groups One and Two before qualifying via Group Three. His prize money this year takes his Championship League career earnings at a massive £90,467.

“I was very lucky to get into the top four today and I needed to raise my game for the play-offs, and that is what happened. In the group game against Martin I had to play really well and that got me going in the final tonight.

“The Championship League has been good to me and I enjoy coming here. I go to China now and I want to carry this momentum forward and make sure I finish the season strongly.”

Trump went into a quick 2-0 lead in the best of five frame match and looked to be headed to victory but Gould pulled off a difficult 59 point clearance to steal the third frame by a single point and keep his hopes alive.

A match-winning break of 109 though, after Gould missed the black off its spot, sealed the victory for Trump and he can head to China for the World Open with renewed confidence.

Gould, who can console himself with a £9,200 pay cheque, was frustrated in defeat, “He played very well. I missed a couple of shots early doors and was punished severely.  I didn’t get going in the final, especially considering how well I played in the semi-final.

“I am disappointed but you can’t take anything away from Judd. He was the best player in the group. I was glad to get a frame because I wasn’t whitewashed in the tournament and it was good to keep that record.”

Earlier, Gould had ended Stephen Maguire’s hopes and the Scotsman departed the competition £13,600 to the good. Trump eliminated Shaun Murphy in a final frame decider to leave the Group Five winner £22,500 in the black.

Championship League Snooker will return in 2015.