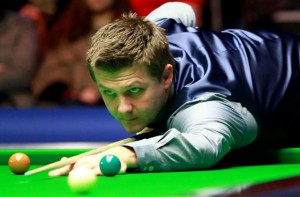 RYAN DAY became the seventh and final player to make up the winners’ group of 2014 Championship League Snooker has he coasted past Andrew Higginson 3-0 to cap a fine two days at Crondon Park.

Day’s victory raises his total winnings to £17,800 and he will be joining Ricky Walden, Judd Trump, Joe Perry, Shaun Murphy, Stephen Maguire and Martin Gould on Wednesday as the final group unfolds.

“I am delighted to get through,” said Day. “I have timed it to perfection really, to play through most of the groups and then get into the winners’ group is ideal.

“The money goes up so there is a lot to play for now and hopefully I can take the momentum into tomorrow’s group.

“I know it has been done a few times before that the winner of Group Seven has gone on to win the Winners’ Group and of course I want to do the same. It is important match practice ahead of China as well.”

In the semi-finals Higginson had got the better of John Higgins, compiling seven breaks between 32 and 55 en route to a 3-1 win. The other semi-final saw Day overcome Mark King to keep his Championship League Snooker run going.

Earlier John Higgins had topped the group with the best record in the seven year history of the event as he won all six matches, conceding just two frames in the process. The previous record was held by Mark Allen who dropped three last year.

Higginson had scraped in with just two wins, only the second time in the event that meagre tally was sufficient to ensure qualification to the play-offs.

At the end of the league phase the top four advances to that group’s semi-finals where the two winners meet in the final and the winner advances to the Winners’ Group on 5/6 March.

Play starts at 11.00am and live scoring can be found at www.worldsnooker.com